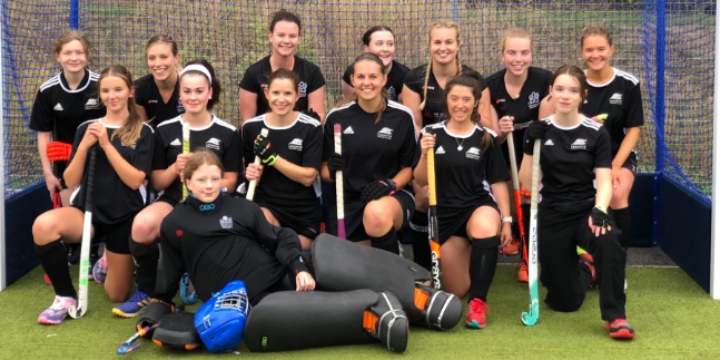 We started the game strong mainly keeping the ball in their half with some good attempts at goal and a few attacking short corners, and, any time they came into our half the defence swiftly dealt with it. Soon Caitlyn scored our first goal. Then it wash half time. We reflected on what happened in the first half, both positive and negative points, as we planned to have earlier passes so we could get into the goal D quicker.

We started the second half and played well until the opposition manged to make a quick goal past our goalie, this made us hinder for a while but we quickly recovered and focused on trying to score a winning goal (as at this point it was 1-1). We had two minutes left of the match but that didn’t stop Lauren from scoring an amazing goal which put us in the lead. Fortunately, the game ended with 2-1 to us.

Our team played very hard and put a lot of effort into the match and it was unlucky that some of our attacks at goal missed but overall, everyone played well and improved throughout the match. I think our goalkeeper, Daisy, did a fabulous job, as this was her very first league match and she evidently made some great saves, also I want to thank Paul, our coach, for giving us encouragement and helpful feedback.

And finally I want to thank the umpires Adam and Josh for keeping a keen eye for anything amiss.

The game ended, amazing soup to warm us up and MOM and DOD debates. Juliet walked away with MOM, implementing some of those karate moves we had practiced at training. Great effort. DOD went to Emma, for honesty re a foot foul. We will not have that behaviour, NOT in this team..... I also noticed a number of reverse flick passes, if i need to introduce a fines system I will. Be warned

I want to end this with a callout to 5 junior players who i have had the pleasure of coaching over the last couple of years. The league sides were very much set up with them and their peers in mind and I was really chuffed to see them make their debuts today. Daisy in goal who has improved significantly and made some great saves and moves more confidently around the goal. Juliet who took some time to join but has thrown herself into being part of the club and continues to listen and learn. Nancy whose tackling continues to impress and will I am sure grow in confidence and we will start to see that slap pass further up the pitch in dangerous areas (she may not believe it yet but there are goals in that stick of hers). Lulu who has made a massive step up in quality and composure (benefiting from some mixed hockey over the summer) and will certainly get league goals this season and, finally, Lucia who offers every team she plays in some aggressive go forward and, despite beating herself up, demonstrated the talent she has today on a number of occasions (going to sort out her hitting and shooting over the next few weeks though!!!)

Everyone, was quite brilliant. Defensively solid, organised and composed (Beckie, Charlotte, Sarah, Juliet and Nancy), our midfield, while finding their feet on the bouncy pitch and with new roles, created chances (Caitlin, Sophie, Liv and Emma) and our forwards kept on moving, leading and with a bit of luck and patience will be scoring a lot of goals this season (Lauren, Janey, Lucia and Lulu).

Thanks also to the Mens 1st team for watching (and squealing like lovestruck teenage girls when goals went in), parents and grandparents who make this possible each week and Nina for soup (I never thought I would ever say that)

Loved it. Get in there and roll on next week and beyond. More to come for certain

Cookies
Some of our web pages utilise "cookies". A "cookie" is a small text file that may be used, forexample, to collect information about web site activity. Some cookies and other technologies may serve to recallPersonal Information previously indicated by a web user. Most browsers allow you to control cookies, includingwhether or not to accept them and how to remove them.

Some cookies are necessary for the operation of our website, if you choose to block them some aspects of the site may not work for you. Non necessary cookies are only set when you have given your explicit consent to their use. Such cookies included those set by our statistics package Google Analytics.

We use cookies to personalise content and ads, to provide social media features and to analyse our traffic. We also share information about your use of our site with our social media, advertising and analytics partners who may combine it with other information that you've provided to them or that they've collected from your use of their services.

Thanks for your message!

We will do our best to get back to you as soon as possible.