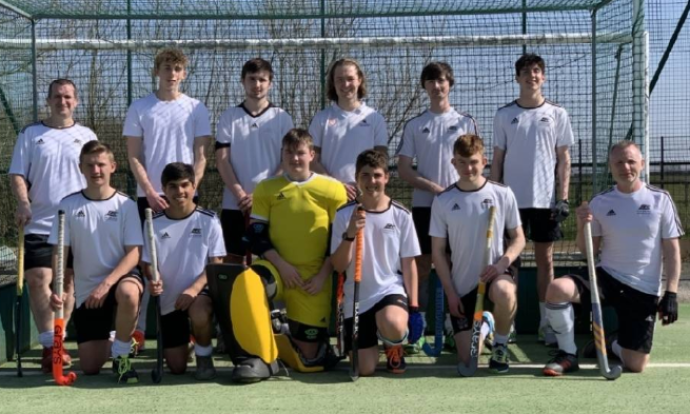 1st Half: Initially, for the first 5-10 minutes we looked a strong match to Mansfield. With a new relatively new squad this season we started to take to the new 3-2-3-2 formation. We created some early chances with a strike from Ethan going past the right hand post. However, Mansfield used great forward runs and their undeniably pacy players to good affect, winning numerous short corners. One was cleanly converted with a low strike into the bottom left corner, and more followed in the first half, with some goal-line scrambles going their way. Their structured short corner routines allowed them to open up space and have time to take shots at goal. By half time, Mansfield had managed to score 4, leaving us with an uphill battle.

2nd Half: Leicester had seemingly clicked into gear, Alex and Raf showing their work-rate and putting in some fantastic tackles. Interceptions were being made all across the pitch and Tom was beginning to look very defensively sound on the right hand side. After a slight scramble in the D, the ball broke to Theo and was sent into the bottom left corner. No more than a minute later, Theo had another effort on goal which broke to Ethan and was converted nicely. A much better second half showing was capped by a short corner being converted by Ethan. A few more chances were made but just out of reach after fantastic work by Oscar, Joseph and Jason in the wide areas.

Cookies
Some of our web pages utilise "cookies". A "cookie" is a small text file that may be used, forexample, to collect information about web site activity. Some cookies and other technologies may serve to recallPersonal Information previously indicated by a web user. Most browsers allow you to control cookies, includingwhether or not to accept them and how to remove them.

Some cookies are necessary for the operation of our website, if you choose to block them some aspects of the site may not work for you. Non necessary cookies are only set when you have given your explicit consent to their use. Such cookies included those set by our statistics package Google Analytics.

We use cookies to personalise content and ads, to provide social media features and to analyse our traffic. We also share information about your use of our site with our social media, advertising and analytics partners who may combine it with other information that you've provided to them or that they've collected from your use of their services.

Thanks for your message!

We will do our best to get back to you as soon as possible.